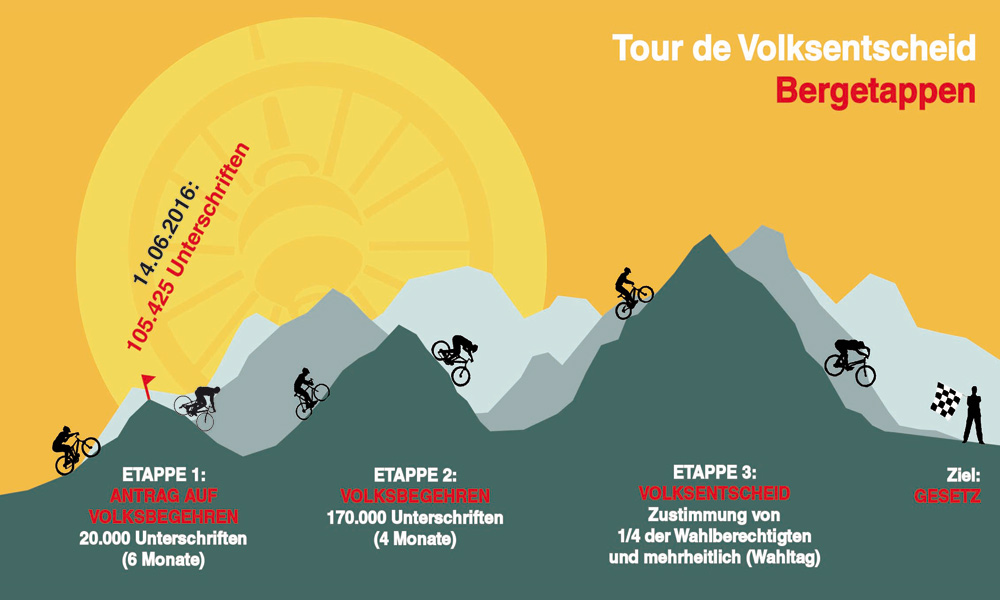 steps of a referendum in Berlin (grafic: Rabea Seibert)

The steps of the Volksentscheid Fahrrad

The first step has been very successful: Our team and many supporters of our initiative have collected more than 100,000 signatures and handed these over the Senate’s administration during a celebrative ceremony. This means that we are one step closer in reaching our goal. But what is actually a referendum and how do we continue after this first step?

In Berlin, organisations have the right to organize a referendum. Hereby, a 3 step process is used: (1) the application of a petition to hold a referendum, (2) the petition itself, (3) the referendum. For step one, at least 20.000 valid signatures which support the petition have to be handed over to the Senate Administration. These signatures have to be collected within six months. In our case, our petition also has the goal to implement official legislation. This means that a draft version of this legislation has been provided to the Senate too.

When the Senate receives the application for the petition, it will check its eligibility. This is done by checking the validity of the signatures provided. As a rule of thumb, 25% of the signatures is invalid, because one person has signed the petition several times or people who signed are not official residents of Berlin. Furthermore, the draft law will be examined by the Senate, if it fits the legal requirements.

When the validity of the application has been proved correctly, the real approval of the legislation needs to be organised. Within 4 months, the organisation has to collect approximately 175,000 valid signatures. The House of Representatives then has the opportunity to discuss the draft law within four months and to adopt it the same as it was handed over by the organisation. Also, the House of Representatives, can present alterative legislation, as was the case with the Tempelhofer Feld referendum. If the legislation is not adopted by the Senate, an official referendum will be organised. The inhabitants of Berlin will then be asked to officially vote on the petition.

What is the relation between the referendum and the 2017 national elections?

There is an official quota in Berlin, that at least a quarter of the Berlin electorate must agree to the legislation presented in order to make it official. To increase the amount of voters, it is beneficial to align the voting of our initiative with regular elections, so that enough people will vote. Therefore, we decided to align the voting of our petition with the national election in September 2017. Although this increase the pressure for us to act fast, it will also increase the chances of success considerably.