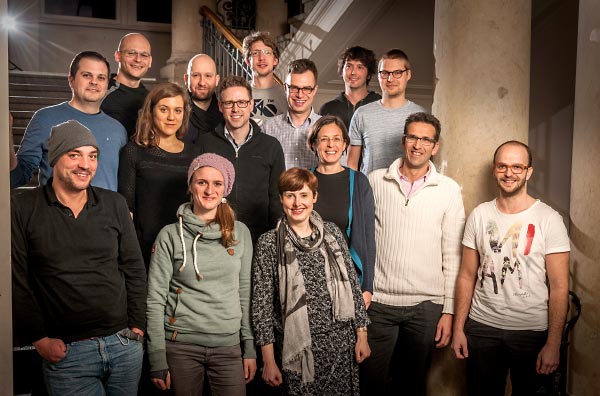 The team around Volksentscheid Fahrrad is currently made up of 100 active men and women. The coordination takes place through the 15 “Team Speakers” (see picture). We are a diverse bunch of people: students, working people, retirees, we are singles, parents and grandparents. Many of us like cycling as means of everyday transportation because it is cheap, others could well afford a Porsche but don’t want to spend their time stuck in a traffic jam. Some of us use cycling for everyday routes: to go shopping, to bring the kids to the Kindergarten and to school. Others choose to go to work by bike – some with, some without the so-called “E-Bike”, and some just like cruising around on their bicycles in their spare time.
Alongside the citizens without political background who are involved in our team, mobility-experts and members of environment-, mobility- and planning-unions have joined in as well. Among these are the ADFC district group for Friedrichshain / Kreuzberg, BUNDjugend, Initiative clevere Städte, mitRADgelegenheit, Netzwerk Fahrradfreundliches Neukölln, Mogool-Bikes, Rad-Spannerei, urbanophil and the VCD Nordost.

Part of the steady team are:

„Always remember that a small group of dedicated people can change the world – in fact, it’s never been different.“ – Margaret Mead (anthropologist)

We don’t yet want to change the world, however we have something in mind for Berlin.

It all started with three Berliners. Heinrich Strößenreuther, member of the action group “Initiative clevere Städte”, met initiators of various referendums during a training workshop of “Leadership Berlin – Network Responsibility”. From then on, he has one question nagging at him: Would it be possible for dedicated cyclists like him to achieve the much needed change in Berlin’s transport policy through a referendum?

Having this question in mind, the architect and urban planner Tim Lehmann published a concept paper in summer 2015 for the ADFC district group Friedrichshain-Kreuzberg which explains the possible bicycle – referendum. Meanwhile, a board member of the Berlin ADFC invites the cycling – initiatives of Berlin to join him and go to the election for the parliament 2016. There, they want to apply some positive political pressure in the matter of cycling in Berlin – cyclists should finally be heard. Ideas are developed, voluntary benchmarks and schedules are discussed. In the end, Strößenreuther convinces the two to draw up common objectives for the referendum.

Then, Strößenreuther and the executive board members of the ADFC district group Friedrichshain-Kreuzberg organise a workshop with over 30 interested people of Berlin’s cycling community. In late November 2015, the common goals for the referendum are elaborated during an entire weekend in the Posteo-Lab in Kreuzberg. This happens under the chairmanship of Martin Lüdemann, who already has some experience with moderating similar events with Greenpeace. Out of 130 proposed objectives, 10 main target areas emerge. Much work and many night shifts later, the 10 goals for the “Volksentscheid Fahrrad” are finished. On December 10th, 2015, the Tagesspiegel publishes the discussion and in the days before Christmas, the debate is heatedly taking place in Berlin’s media.
A draft legislation is drawn up out of the referendum’s 10 main goals in spring 2016.

Within four short weeks, 105.000 signatures are collected for the request of starting the referendum.